In 2021 the theme of the IDM is Mathematics for a Better World. Create a poster that shows one way to make the world a little bit better using mathematics. Instead of words, use pictures combined with numbers, formulas, geometric shapes, and other mathematical elements to express your idea. Use mathematics so people worldwide can understand it, even if they don't speak your language.

You can send us your posters until March 1, 2021. We'll share the best ones we receive so you can use them to create an exhibition for your IDM events.

Everyone can participate. Share the challenge in your school or university. Team up! This poster shows an example of pooled testing, a way to find people infected with a virus by testing them in groups. Samples in each group are mixed and tested together; if the mix tests positive, extra tests are performed to find the infected group members. It reduces costs, time, and materials compared to doing individual tests.

Create a poster to show ways to make the world healthier. This poster teaches you how to bake cookies using a 1:2:3 weight ratio of sugar, butter (you can use vegan butter!), and flour, which works the same whether you measure in grams or pounds. Time and oven temperature are also expressed using fractions and some well known international constants. A world with cookies is a better world!

Create a poster to share ways to make the world better through fun and joy. This poster shows the fast increase in world temperatures and CO2 emissions in recent years to create climate change awareness. It combines the famous “Warming Stripes” visualization on the right, which codes the average temperature of each year using colors, with a chart of CO2 emissions over the same timespan, styled as a column of smoke.

Create a poster to communicate important ideas for a better world.

Warming Stripes visualization by Ed Hawkins (University of Reading) is under an Attribution 4.0 International (CC BY 4.0) license.

The annual CO₂ emissions chart is based on data by the Carbon Dioxide Information Analysis Centre (CDIAC) (1850-1959) and the Global Carbon Project (1959-2019), compiled by Our World in Data.

Rules of the challenge

Share one idea that makes the world a little bit better. A way to:

Express your idea by creating a poster (a picture that can be printed and hung on a wall) that doesn't use any words or text. Use drawings combined with mathematics to help you communicate the idea to people all over the globe. You can use all sorts of mathematical elements, for example:

Submit your poster
The challenge ended. Visit the gallery!

Tips for creating your poster

Mathematics allows us to express completely new ideas with great precision, even to people who speak a different language or live in a very different culture. Concepts expressed mathematically can be understood by people hundreds or even thousands of years in the future.

Mathematics is so powerful as a universal language that scientists use it to send messages to space for alien life forms to decode. For instance, the Arecibo message is a sequence of 1,679 bits, which aliens should realize can be assembled into a 23 x 73 rectangle because both 23 and 73 are prime numbers. This arrangement forms an image that shows a way to represent the numbers 1 to 10 and then uses them to express many other things: The chemical composition of human DNA, the size of the earth's population, the average height of a human, and more.

It's a small math puzzle that smart aliens with some concept of numbers and basic knowledge of chemistry and physics can decode. A truly intergalactic way of saying, "Hi, we're the humans from Earth." 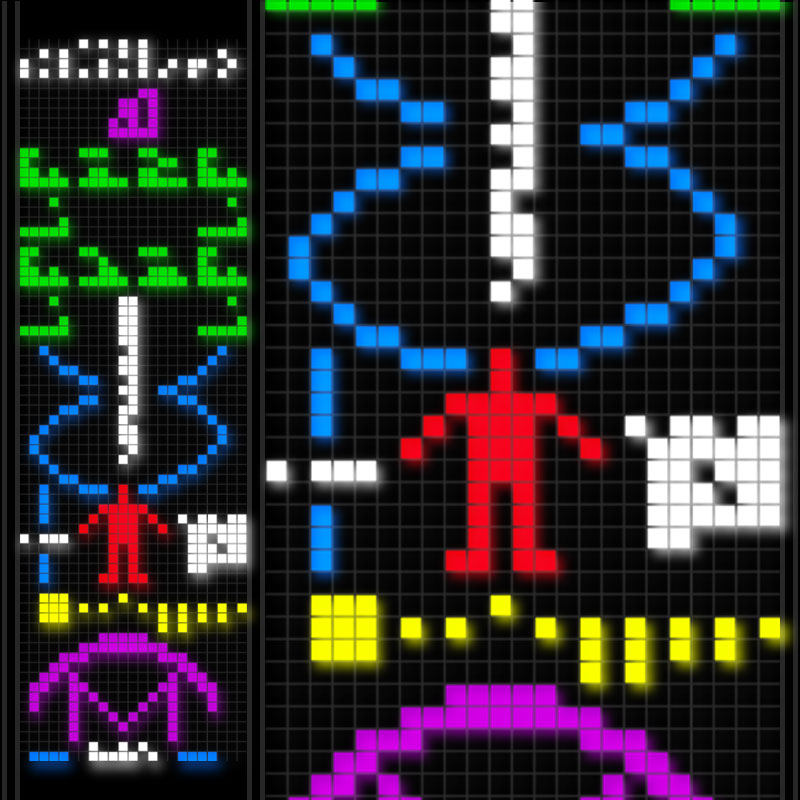 The IDM 2021 Poster Challenge is a joint project by the Canadian Commission for UNESCO, the Centre de recherches mathématiques and IMAGINARY for the IDM and IMU.